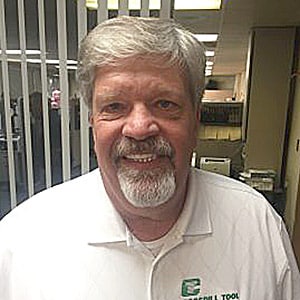 Cogsdill’s Southeast Regional Sales Manager, Chuck Kannisto, has announced that he will be retiring at the end of 2019.

Chuck has worked for Cogsdill since 1980 when he was hired in their Farmington Hills, Michigan office. He transferred to Cogsdill’s South Carolina office and company headquarters in 1981 where he handled customer trials and customer technical support, which eventually included some overseas areas such as China / Asia and Mexico.

Kannisto was eventually named sales manager for the SC-based regions, which at the time included the Southeastern US, the West Coast, the Southwestern US, and New England. From there, he became Customer Service Manager until he was promoted to Southeast Regional Sales Manager in 2009.

Kannisto has always been valued by the company and customers alike for his technical abilities with all Cogsdill products, and particularly the Shefcut product line, and he has continually been involved with training customers and distributors in the field as well as in Cogsdill-sponsored seminars. The entire Cogsdill family wishes Chuck all the best in his retirement.

Randy Baytes has been appointed Southeast Regional Sales Manager. Randy began his employment with Cogsdill in South Carolina in 1987 working in the shop for Cogsdill’s Dearman Division pipefitting tools and accessories. Baytes subsequently transferred into the Cogsdill customer trials department and he also attended night classes at a local technical college to study Graphic Engineering and AutoCAD. Following completion of that course, he then worked for Cogsdill’s R&D Department for several years before being promoted to Regional Manager of the Nashville Region in 1999. After 20 years managing the Nashville Region, Randy will reside in South Carolina and cover the Southeast Region effective January 1, 2020.

This site uses Akismet to reduce spam. Learn how your comment data is processed.